In this week’s coaching conversation, Nenad Trunic joins the Basketball Podcast to discuss offensive and defensive concepts for teaching the pick and roll. A key lecturer with FIBA Europe clinics, the Serbian-born Nenad Trunic has spread his teachings on basketball in dozens and dozens of countries, and through two books.

The myriad of countries as an instructor mirrors his own career as a point guard. In 1985, Trunic was a part of the up-and-coming U16 Yugoslavian team that won the European Championship for Cadets alongside future stars Vlade Divac, Toni Kukoč, Dino Rađa, Aleksandar Đorđević. Later, he took his skills to pro leagues both in his home region (Yugoslavia began splitting up in 1991, resulting in separate countries of Croatia, Montenegro, Serbia, Slovenia, Bosnia and Herzegovina, and Macedonia), Switzerland, Italy, Turkey, Poland, Hungary, Austria, and Cyprus.

Trunic published his first book in 2007, Training of young basketball players of different age categories, and his second in 2018, Basic Basketball Skills. The 52-year-old father of two is a firm believer in education, both teaching others and learning himself. His first degree came in 1992 at the University of Physical Education in Belgrade, followed by a Master of Arts degree, for physical culture field (Major: sport – basketball) from the University of Physical Education, and in 2006, he added a Ph. D. for Management of Basketball Training Technology from Belgrade University Braca Karic. 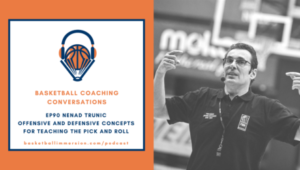 “A basketball team is a company. So, we should decide and we should divide responsibilities of players in all the situations.”

“Most of the top Euro League teams, they are using flat defense . . because they want to push the offense to make pull-up jumpers from the middle distance. “

“If we are talking about closeout on a shooter after the pick and roll . . I am teaching closeouts with one hand . . which hand? The hand closest to the shooting hand.”

“First look is always to punish the under-the-basket mismatch, then the second look is to punish a mismatch on the perimeter.”

“For big men who switch, who are staying on the ball . . I’m teaching guards to move laterally first . . and then make a change of direction and attack . . because it’s much more difficult for big players to move laterally and then play defense against penetration.”

“The big player’s responsibility is to control the level of the ball. So, I don’t want him to attack the ball handler . . I want my big man just to move.”

“Not so many teams are using the re-screen . . usually they are passing the ball out of the screen which is wrong because I think defensively it is very difficult to play the screen twice.”

“My philosophy is to divide offense into three parts: fast break, secondary break or early offense, and set offense.”

“For me the fast break is any situation of numerical or space advantage . . so 3 against 3 in the half-court is also a fast break.”

“In defense, we must have rules, strict rules, no excuses . . in offense, [we want to have] principles and inside the principles players must read and react . . so, definitely, offense must be more free than defense.”

“Fundamentals, proper physical preparation and high intensity. This is something which can never be missing from practice.”

“Another common mistake in teaching is speed and intensity . . this is good but it is not the first step, it is the third step. The first step is good technique . . then repetition, then increasing intensity.”