In this week’s coaching conversation, Canadian Women’s National Team head coach Lisa Thomaidis joins the Basketball Podcast to discuss driving success by building team identity. In addition to being the national team head coach, Coach Thomaidis is also in her 21st year as head coach of the University of Saskatchewan Huskies.

In the summer of 2012, Thomaidis was an Assistant Coach with the Women’s National Team at the London Olympics. There, the team made a dramatic run to the Quarter-Finals, before falling to the USA, the eventual gold medallists. 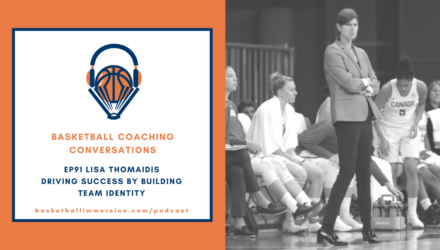 “Our three words are ‘dynamic,’ ‘relentless’ and ‘together.’ . . What we’re trying to do is make sure those words permeate everything that we do and how we do things.”

[On having a team identity] “It’s always something you can look back upon. You can evaluate your performance . . Did we live these words today? Did we live our identity? And if we didn’t, where are the shortcomings and where were the gaps?”

“We’re constantly bringing in different athletes . . Having that style of play that’s consistent, that our athletes know what is expected . . I think it’s really helpful.”

“It could get to a point where you recruit that way . . for a lot of our athletes who get to the stage where they’re senior national team prospects, they possess a lot of these pieces already.”

“The magic comes with how you take that and how you make that your team identity and how you mold those individuals into that identity that we want to see and that we believe is going to produce a medal-worthy standard.”

“We highlight when we see things in practice that exemplify ‘relentless,’ or ‘dynamic’ or ‘together’ to really reinforce it. It’s always there. We’re living it.”

“You always have those anchors you can come back to with the scout and with the preparation.”

[On scouting] “Our players will all receive the video ahead of time, they’ll get it the night before. There will be a main video piece . . that’s less than 10 minutes long and then there will be a supplemental video.”

“A lot of times, it’s really just pointing out what is unique or what is different or special to this team that we have to be particularly aware of.”

“The paper scout . . is also given out in advance . . at the top will be our three identity pieces and . . the keys to the game and how they relate to those identity pieces.”

“What they really want is they want to know what that one person’s go-to move is and they want to see it on film.”

“We’re always wanting to get feedback from the athletes . . we debrief practices and want to hear from them . . are we making progress in the areas we talked about?”