Home » Podcast » The Basketball Podcast: EP92 Tuomas Iisalo on Collective Basketball
RELEASE DATE : 25/04/2020
In this week’s coaching conversation, HAKRO Merlins Crailsheim head coach Tuomas Iisalo joins the Basketball Podcast to discuss collective basketball. Iisalo has been head coach in the Basketball Bundesliga, the highest level league of professional club basketball in Germany, since March 2016.
After the end of his playing career, Tuomas Iisalo took over as head coach for the first division club Tapiolan Honka in the 2014-15 season and was subsequently assistant coach of the female U15 national team in Finland. In March 2016 he was appointed by German Bundesliga club Crailsheim Merlins  committed. The relegation in the Bundesliga has been missed out, but Iisalo received a contract extension and supervised the team after relegation in the 2 Bundesliga ProA .
In the 2017-18 season Iisalo led the Crailsheimers back into the Bundesliga as runner-up in the second division. He managed to Crailsheim in the season 2018-19 against relegation in the Bundesliga, which was established only after a victory on the final day and was called a “miracle” due to the circumstances. At the beginning of the game year 2019-20 to Crailsheim developed under Iisalos line to the surprise team in the league and stood after five wins from the first five games on the first table rank. 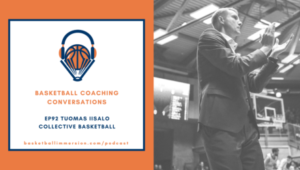 [On recruiting/selecting players] “You check the basic statistical profile of the player. .what, to me, is also very important is the play type . . A lot of times players get talked about or advertised as pick and roll players . .but they have very low usage [of the pick and roll] in college.”

“If the player can function all the time as part of that 5-man collective all the time without relaxing . . If that’s a positive. . .then you start talking to people who know him to find out if the mindset matches the game.”

“Who the best player is .. .to me that’s the player who helps the team win most and that’s not always the guy who puts up the biggest stats.”

“We were thinking about the big picture — competitive advantages and how you can create them.”

“The competitive advantage, you have to find it from somewhere else other than just pure talent . .what we can do, collectively, we can play better basketball.”

“The teams that were able to over-perform were those with an extremely high work rate . .and those teams that stick together and play team basketball even in a difficult situation.”

“At the higher level, the differences are very small and the key is to create better habits.”

“If it [skills] are not transferring, a lot of the fault is on the coaches and on the practice design.”

“Habits make or break a player.”

“It was always difficult to choose. Are we working against the opposition defense or our own defense . .because the reps you do . .they can set your habits back in your own concepts . .so there’s a certain trade-off, but you also can’t go into the game unprepared . .for us we’ve chosen much more concept-oriented than context-oriented.”

“We try to create simple rules that give guidelines to the players but don’t really constrict them.”

“If you’re playing against drop [coverage on the pick and roll], it’s very different because then the ball handler must be much more aggressive, provoke the defense. The 5-man’s the angle of the roll is different.”

“Reverse engineering is something, especially in the past few years, we’ve been doing more and more . . We take the endpoint of the offense, a certain sticking point . . we are mostly a pick and roll offense, looking to create advantages, looking to create closeouts . . so closeout decisions were the logical starting point because that’s usually the endpoint of a lot of offenses or where a lot of hiccups happen.”

“We are really pushing them to make quick decisions in the beginning [of training], even if it’s the wrong decision. But we want to really push them in that direction.”

“That’s what I mean by reverse engineering . ..every time we add a layer. Then at the end, we put the entry in which could be like a diamond entry or an Iverson cut or a horns cut, we are already familiar with what happens after that.”

“I think the level of challenge has to go up. You need to constantly challenge the players in the drills we do.”

“The concept of a good shot shifts during a possession.”