Players often teach us what we should be teaching. This is the case for the stab dribble. I always taught first step jab, and first step crossover, to start the first dribble an offensive player takes. As I watched players, both mine and professionals, I often saw them doing something different than what I was teaching.

It took some time, lots of film study, discussions with other coaches, experimentation with players on my team and at summer camps, and a trip around the world to 45 practices, to confirm my beliefs in the stab dribble concept.

Let me be clear, this is not a new concept. I am just explaining it. I get asked frequently (usually in North America) about the concept. International players have been using this concept for years. Most North American players adopt a stab dribble to a avoid a “jab step” travel call that was often not allowed in the international game.

What is a Stab Dribble

A first step is the first dribble an offensive player takes when they decide to dribble the ball after a catch. This first step needs to be as explosive as possible. The goal is to gain, and maintain, a space advantage vs. a defender.

I no longer teach jab or crossover footwork on a first step dribble. I teach my players to immediately get the ball to the ground on the catch. This action is what I call a stab dribble.

There are two main methods of getting the dribble to the ground.

“Stab Strong” One dribble on the same side that the ball is caught on. This most often involves the use of an in and out dribble that produces an inside-out action (like the hand movement of an inside-out dribble). 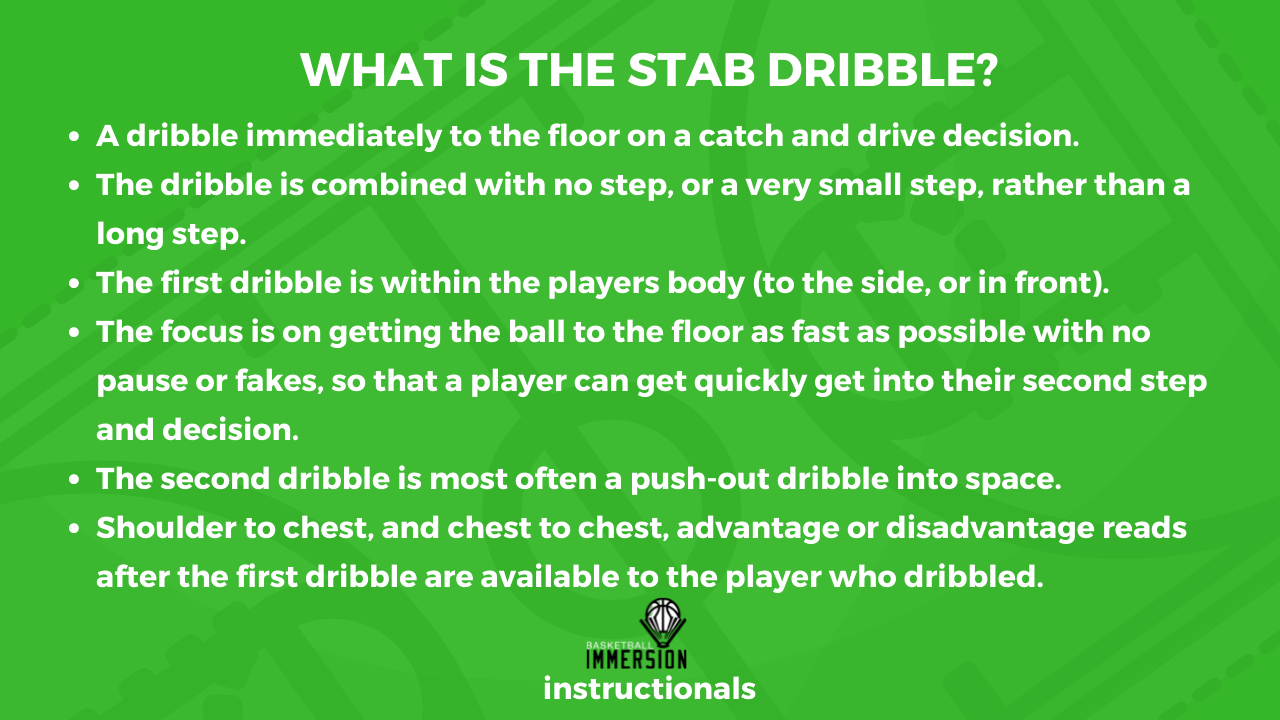 “Cross Stab” Using one dribble, the ball is changed, or crossed over, from one hand to the other as the first action on the catch.

After a stab dribble the offensive player can continue their dribble attack using a second dribble. While this second dribble is sometimes close to the body as well, it can also be a push-out dribble into space.

Why Teach the Stab Dribble

There are many benefits to teaching the stab dribble. I already mentioned one of the main reasons is that my players often use a stab dribble in the flow regardless of what I coach because it is natural. Here are some other reasons.

This concept aligns perfectly with our zero seconds philosophy. We believe that the most open an offensive player is going to get is when they first catch the ball. As such there are no predetermined movements. We want technical aspects of offensive play executed quickly and decisively with no pause on the catch. This means that as soon as a player’s foot hit the ground they are immediately into their shot, pass, or drive. As a result, we do not emphasize jabs or fakes, but rather we want our players to make decisive decisions on the catch about whether to shoot, dribble or pass.

The stab dribble helps players make a decisive decision. If the drive decision is determined to be the best decision for an offensive player, then an immediate attack with no hesitation can take advantage of a recovering defender or help side defenders. If they cannot score it is because the defense prevented it. This creates secondary decisions. In this case we teach players how to attack and counter. Learn more about how a player reads advantage off the dribble here How to Teach Players to Read Advantage and Disadvantage

The Problem with a Long First Step

The stab dribble concept gets a player quicker into their second step. According to one of the top athletic movement specialist in the world, Lee Taft, “The long first step does slow players down because it is actually a brake. Anytime the foot is ahead of the knee it engages the hamstring in a braking action and it is not until the foot is behind the knee that we can push into the floor for power.”

The quote came from a conversation with former Coaching Development Director at Basketball BC, Mike McNeill, who went on to say that he “spends time trying to get kids to take shorter steps and usually they feel the difference.”

Helps a Player Get Quicker into the Decision

Getting quicker into the second step also gets a player quicker to the shoot, drive or pass decision off the dribble. The stab dribble gets a player quickly into the application of the decision off the dribble. Since the ball gets to the floor faster, the offensive player is more engaged in reading the visual cues and distracting info responsible for decision-making. Now a player can read a shoulder to chest, or chest to chest advantage or disadvantage, to decide whether they should shoot, pass or counter a defensive coverage.

Since a player using a stab dribble does not fully step until after the ball is already dribbled, there is no turn away from the basket. This allows the offensive player to read their advantage or disadvantage quicker. Attacking in a straight line forces a defender to gap deeper, and to drop step more, to counter the forward movement. A forward attack can also draw help defenders deeper if the help side defender(s) help to stop the ball.

Adds Deception to a First Step

Jab steps can add deception prior to a first step attach. The problem is they can also pause the action. This gives the off the ball defenders more time to load up in help positions. We have talked about the value of no pause as this allows the offensive player to attack prior to the on the ball, and off the ball, defenders getting more organized.

The deception on the stab dribble can help the offensive player to gain an advantage without pausing. This can give the attacker an advantage regardless of whether they have a quickness advantage or not on their defender. The deception comes from the ball getting to the floor with an inside-out action (like the hand movement of an inside-out dribble). This movement causes a player’s feet and shoulders to get outside their body. This often forces a defensive reaction (pause, lift, movement) that gives an advantage to the offensive player.

More deception can come from the use of the three different stab dribbles. Each one can force a reaction in different ways, but all can be useful in creating an advantage.

Why Teach the Stab Dribble to Youth Players

An added benefit for youth players is that the stab dribble removes forward stepping footwork from the decision to dribble the ball. This removes the possibility of a travel as the dribble is prior to the step.

Removing the forward stepping footwork takes away a difficult learning variable in applying the first step concept. All a player needs to do is focus on getting the ball to the floor as fast as possible.

How to Develop the Stab Dribble Concept

The stab dribble can be developed using any techniques you use to develop first step. Below is an example of a drill, Back Drop 1-on-1, that isolates the movement to start live 1-on-1. For Basketball Immersion members, I uploaded how we teach stab dribble for the first time to new players. If you are not yet a member sign up to access this video, and the other video learning, here Get Access.

Is the Stab Dribble the Perfect First Step Technique?

No technique is perfect or exclusive in its use. My players don’t always use a stab dribble. Many player’s use it a lot. Some use it less. For all new players I teach it to there is a learning curve in its application. We teach it through emphasis within the one-on-one and small-sided games we use.