In the modern game, the offense is often looking to create an advantage through the ball screen. Depending on how the defense guards the ball screen, the offense wants to attack their coverage in order to create the largest possible advantage. Željko Obradović and his Partizan team offers great examples of how to organize ball screen concepts that apply no matter what offensive set is being executed. In this article, we are going to explore ideas of how to organize your ball screen offense, some of the spacing concepts implemented by Željko Obradović, and solutions used to attack aggressive coverages. 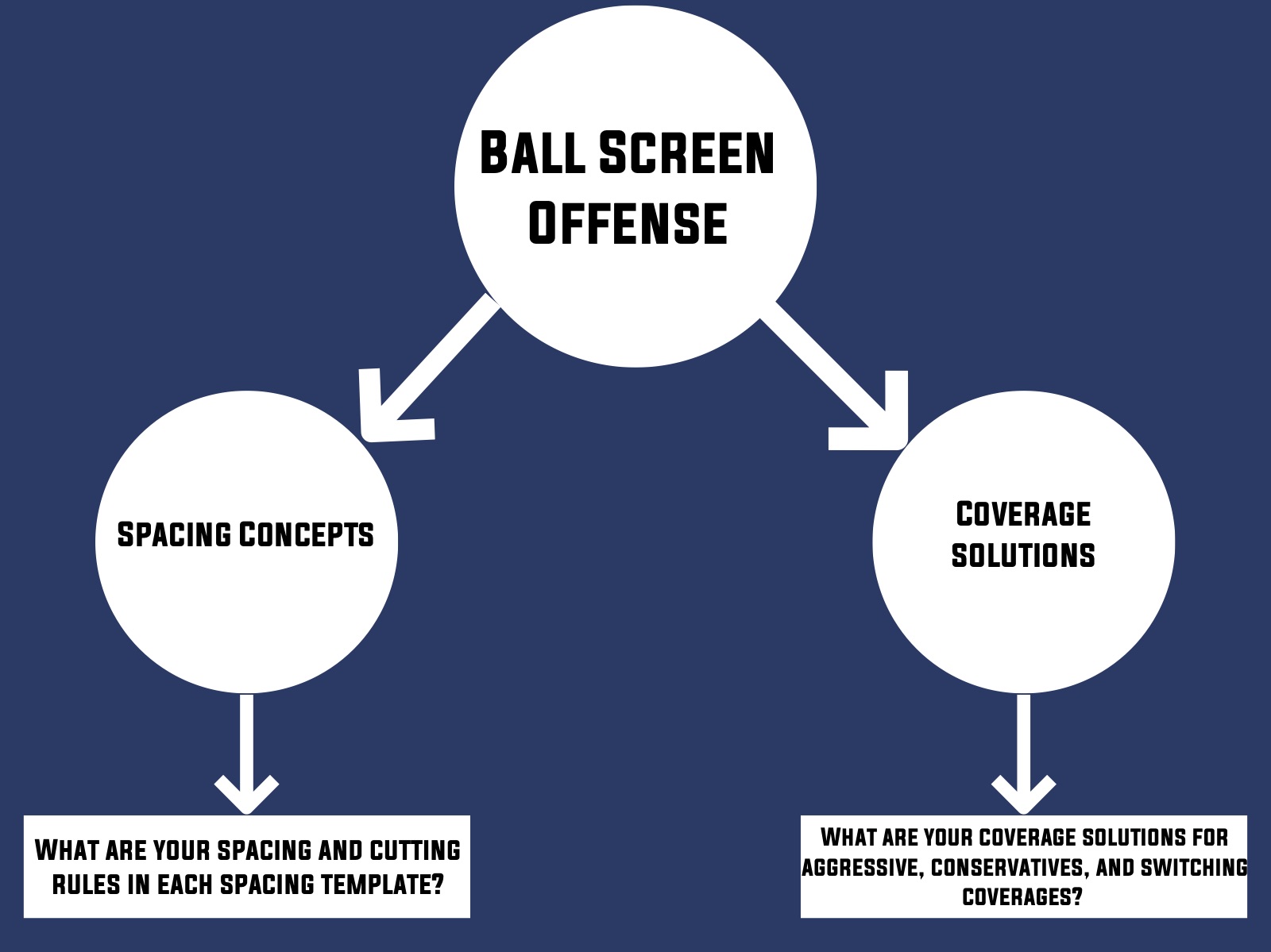 Two key considerations of ball screen offense is your spacing principles and what coverage solutions are emphasized. Generally speaking, your spacing principles are how the three players not involved in the action are reacting to the action while coverage solutions are what the two players involved in the ball screen are doing to punish the coverage. 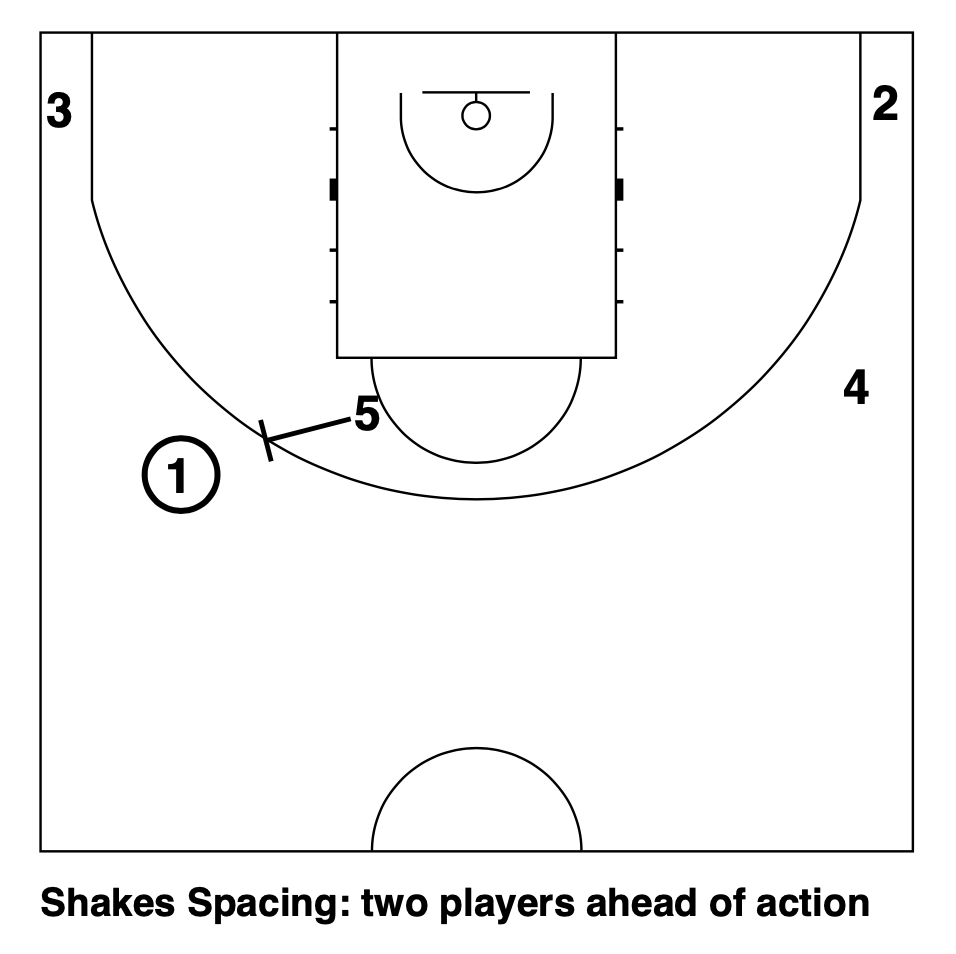 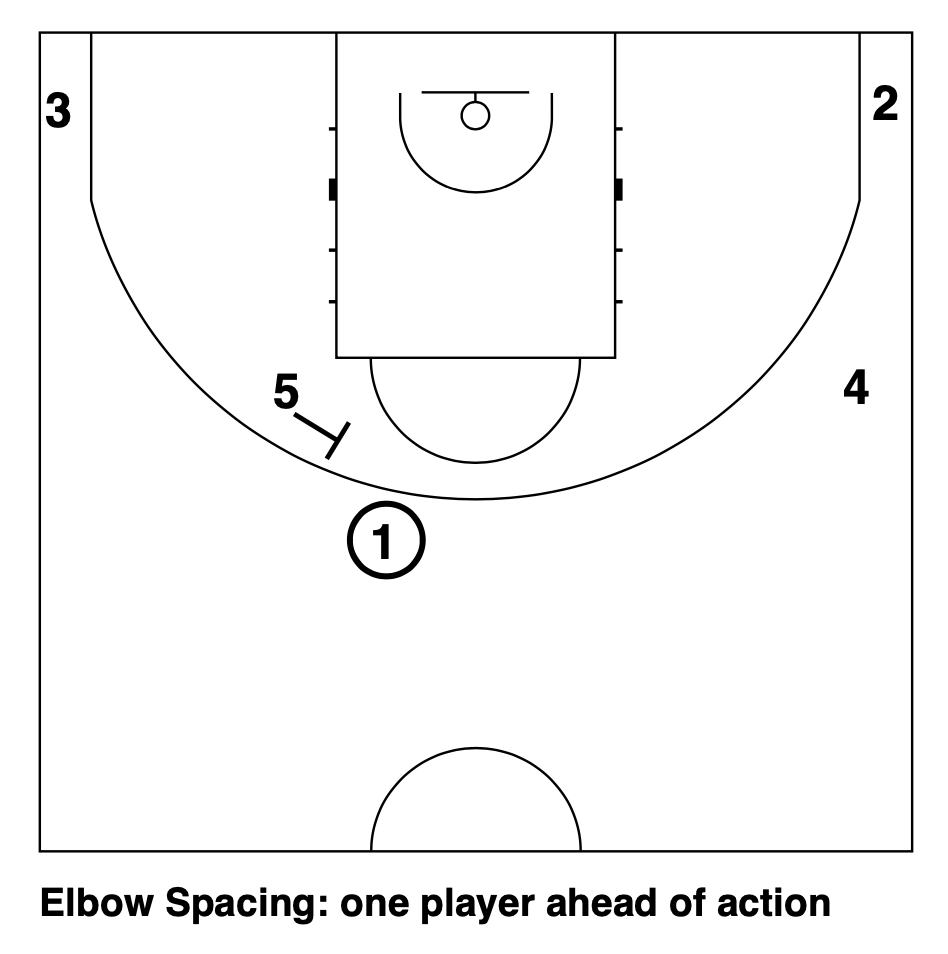 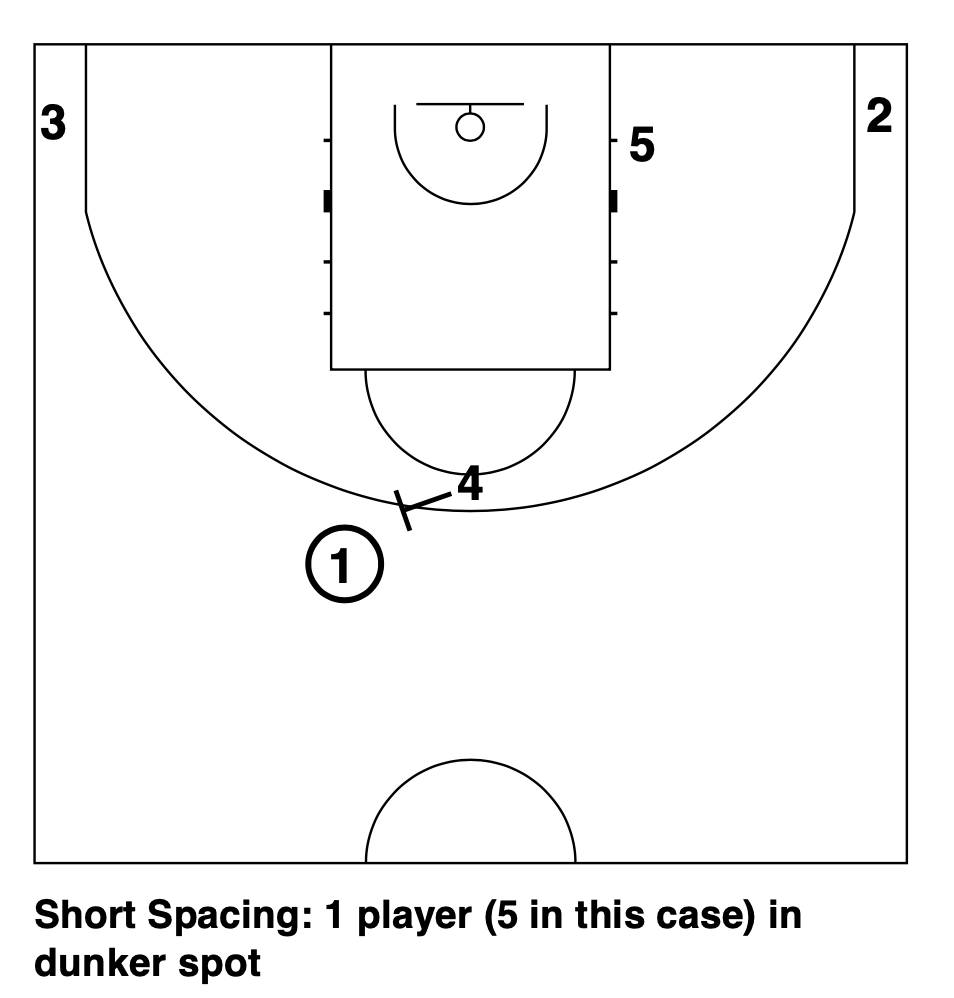 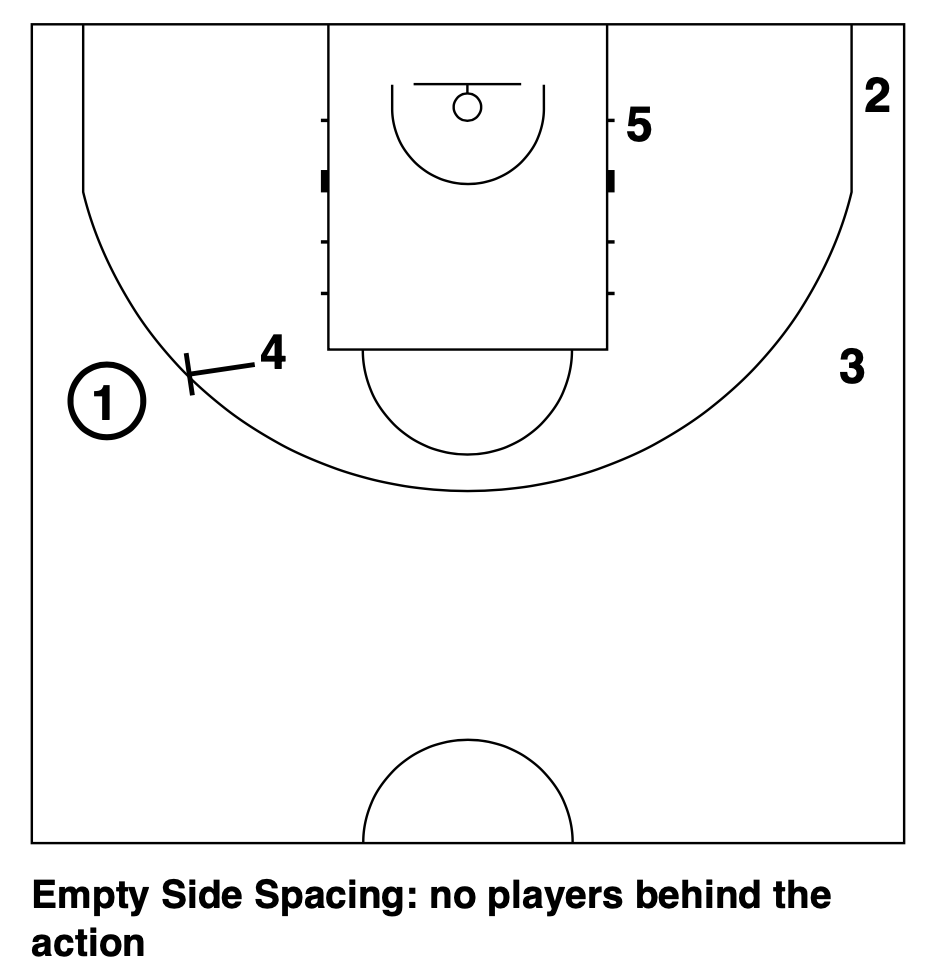 In this section, we are going to focus on two spacings: Shakes and Elbow spacing. The goal of whatever your spacing concepts are is to punish the “take two” defender whenever a defender on the two side helps on the ball handler or roller by making it difficult to guard both players. We are going to look at two examples of concepts used by Željko Obradović and Partizan.

In this first example, the offense is playing out of Shakes spacing. The nail defender is loaded to the ball in order to discourage the ball handler getting downhill. By baseline cutting and sliding, it clears the nail and creates a double gap for the ball handler to attack. The defender cannot both help in the gap and make the long closeout. This can be a great movement to use to attack the screener’s defender if the defense is playing in drop coverage. This is a spacing concept that has been popularized by Željko Obradović with his teams in the past and is now commonly seen in international basketball.

In this second example, the offense is playing out of Elbow spacing. The nail defender tags the roller. The fill behind by the offensive player allows him to separate from the player in the corner and not allow the “take two” defender to be able to guard both. This creates a closeout situation and open shot for the offense.

The first solution that we are going to explore is for the offense to move the ball twice.

What if the screener is not a great decision maker in short roll situations?

The same principles apply if the ball is thrown ahead instead of to the screener. The screener rolls deep instead of short. The player receiving the first pass out is looking to move it a second time to punish the defense’s decision to either tag or not tag the roller. Notice the diagonal angle of the roller. This stretches the tag defender further into the paint and creates a longer closeout. In this case, the reaction is to skip the ball to create a long closeout and advantage for the offense. Again, the offense is trying to maintain the advantage through quick decisions and spacing so one defender cannot guard two offensive players.

Spacing can have an impact on the effectiveness of the coverage solution. In this case, the offense is in Shakes spacing. When the ball handler throws ahead, it means the defense must tag the roller from the single side. This creates an easier decision on the skip pass because there is only one defender to read.

Change the Angle of the Screen

Another potential solution to either prevent or punish aggressive coverages is to set the screen at a flatter angle.

In this example, the screener has a flat angle with their chest pointed to half court. By setting a flat angle screen, the screener’s defender does not know which direction the ball handler will attack. This will result in either the hedge not occurring (like this example) or for the hedge to be late and opening the possibilities of attacking the defender’s hip or splitting the coverage. As with this clip, this coverage solution is best used when the ball handler has a speed advantage compared to their matchup.

Defending Two Actions in a Row

Another solution to punish aggressive coverage is to force the defense to defend two actions in a row.

In this example, the offense uses a Zipper entry prior to initial ball screen. This initial ball screen has Elbow spacing. Notice that as the screener rolls, the lower defender steps in to tag. The ball handler passes the ball behind the initial action. This is when the second ball screen is set with the same spacing. Due to stepping in to tag on the initial action, the hedge is late on the second screen. The ball handler is then able to attack the hip of the hedge and read that the nail defender is tagging the roller. By forcing the defense to guard two actions in a row, it results in the coverage being late and not executed properly.

Partizan offers some great examples of concepts you can consider when designing your ball screen offense. My main takeaway from watching them was how they have solutions to each situation the defense presented. This made them difficult to guard as they had an answer for every defensive coverage. Check out the full Željko Obradović Partizan edit here: 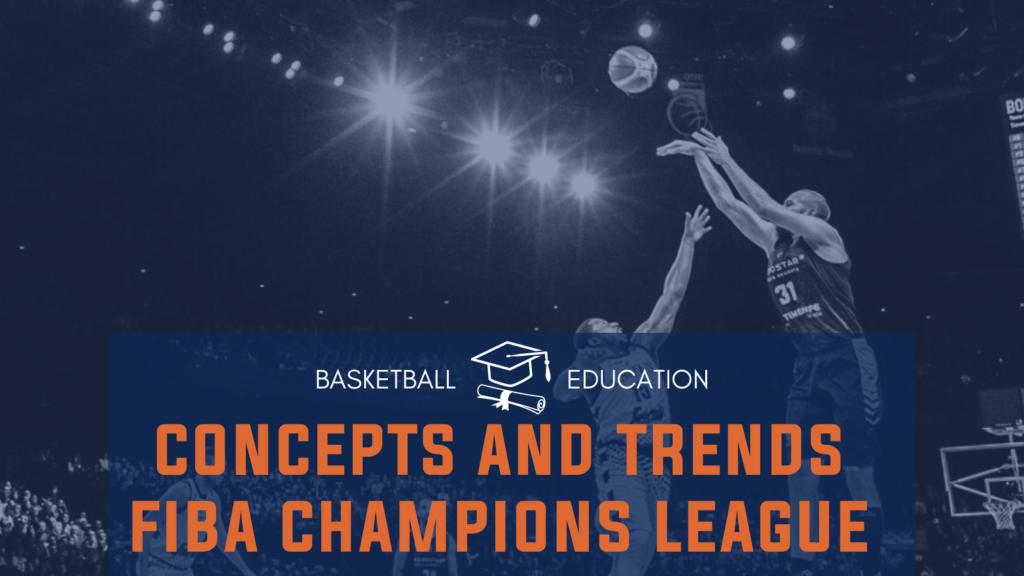 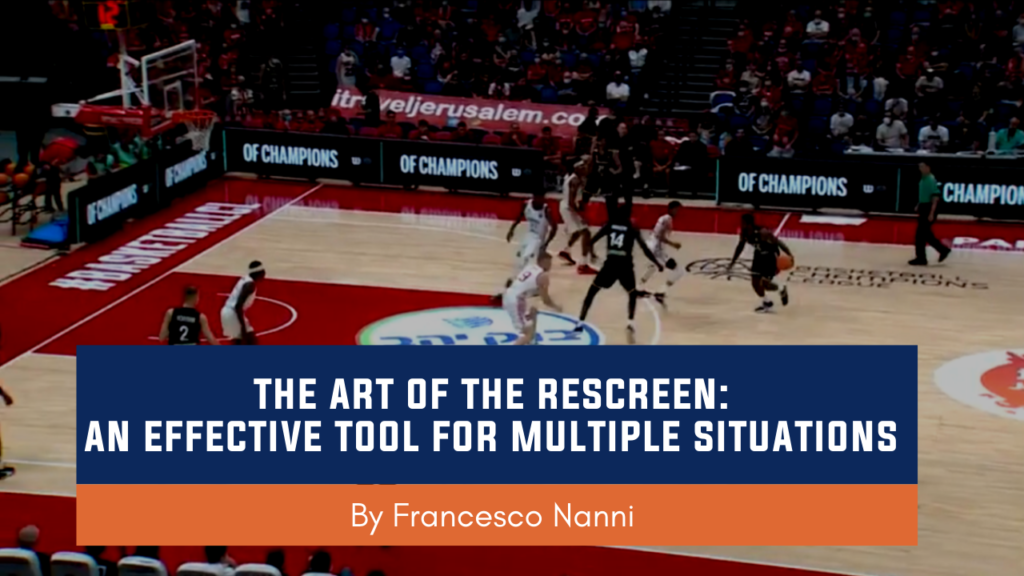