Youth basketball players can’t shoot from the perimeter. Shooting is not an age appropriate skill for most young players. The smart coach will design their defense based on this knowledge. If one of the goals of the competition is to put your best efforts forward in pursuit of victory, then playing a zone or pack defense vs. youth players is smart coaching.

This does not mean that smart coaching is always in the best interest of a player’s development.

Few are going to disagree with the Coach Torbett tweet. Youth basketball player development would be better off if zone defenses were not allowed. Of course the reality is not that simple.

The Reality of Banning Zone Defenses

Basketball Ontario, the provincial governing body of basketball in Ontario, uses age appropriate rule modifications. According to Basketball Ontario “Rule modifications were formulated with the best interests of the children playing the game at the Learn to Train stage of development and aimed providing stage appropriate competition that maximizes each athletes’ long term development.”

Making zone defenses illegal is an attempt at formulating a game that is in the best interest of children. The problem is not the rule. In my experiences when zone defenses are not allowed coaches still find a way to manipulate the rules to win. When I coached youth basketball with a closely guarded rule in place coaches were on the sideline complaining the whole game about how close or far away a defender was. The intent of the rule and the inherent difficulty in enforcing it made it frustratingly difficult to coach. 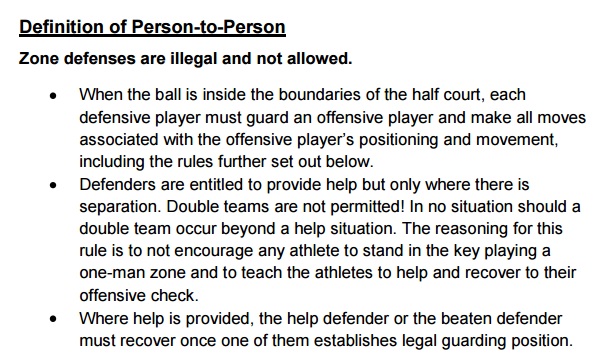 Coaches who just wanted to win and isolated their best player. The “no zone” defense rule made it easier to do so. Three or four players spaced the floor and one player dribble attacked. Since the defenders were prevented from being in early help by the “no zone” rule the offense had the advantage.

My purpose here is not to change your mind about your perspective on zone defense in youth sport but to change the conversation.

My goal is to give you solutions to improve your player’s success. Given the fact most young players cannot shoot consistently from the perimeter I am also going to suggest the solution has nothing to do with teaching shooting.

We need to focus on giving players a solution. We focus way too much on the administration of the problem. Zone or pack defenses are smart coaching. We know coaches use them no matter what the rules are.

Let’s focus on how to teach young players how to play against a zone. There are a number of reasons why zone defense is effective at the youth level but let’s focus on shooting. The goal of a zone is to pack as many defenders as possible close to rim and in the paint. This takes away space and forces players to have to shoot from the perimeter to score. Shooting at the youth level from the three-point line is not an age appropriate skill. No matter how much time you devote in your practices to improving shooting from the perimeter I feel the impact will be minimal.

These are the zone offensive concepts I would focus on. 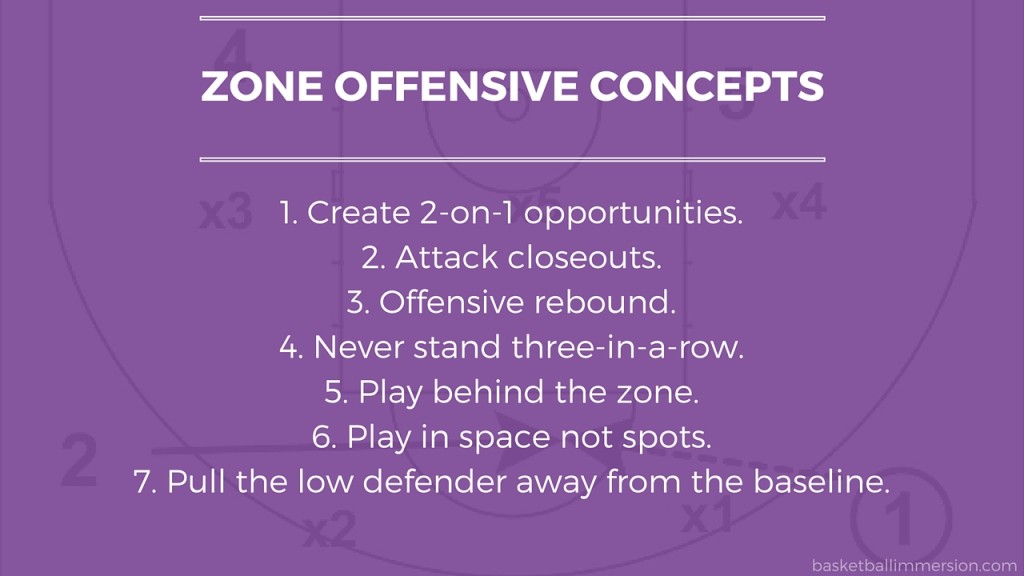 One of the questions I get asked about zone offense is what do I run versus different types of zone defenses. My answer is always the same, I don’t care what type of zone the defense runs. Over-thinking is the biggest deterrent to offensive success. My player’s execute poorly when they are confused. Some of our opponent’s use multiple defenses. Some of our opponent’s disguise these defenses very well. If our player’s start thinking that the defense is a zone and not a player-to-player defense, then the defense has already caused disruption that could affect our execution. This is why we don’t care what type of zone a team plays. We still run the most basic zone offense possible. We run it regardless of the type of zone defense.

In the video I discuss the concept of swinging the ball quickly on the initial entry, playing behind the zone and pulling the low defender away from the baseline. The two concepts I want to focus on for this blog are the concepts of creating 2-on-1 opportunities and attacking closeouts. I feel these are the most over-looked concepts by youth coaches. If your players cannot shoot effectively yet from the perimeter these concepts become the most important concepts you can develop.

To understand what I mean by creating 2-on-1 opportunities vs. a zone defense watch this breakdown of Louisville’s zone offense vs. North Florida. I was fortunate to have sat of the bench with North Florida during this game as an observing coach and the value was tremendous.

If you are successful in creating 2-on-1 opportunities, then you are still faced with the problem of one of your players being open to shoot. In our zero second philosophy I feel a youth coach can be effective in developing age appropriate skills like footwork, dribbling, ball-handling and first step progressions. I would emphasize attacking closeouts or the gaps in a zone on the catch. Whether it is a zone or player-to-player defense players must be taught at young ages to attack aggressively on the catch. This will make up for their inability to shoot consistently from the perimeter. You can read more on this philosophy in How to Use Our Concepts to Teach Your 3rd Graders How to Play Basketball

To develop an attack mentality you must emphasize it. Coaching interventions are used in our practices to encourage and educate our players about opportunities to attack closeouts and gaps. Attacking closeouts is effective because a defense breaks down in recovery. If your offense creates a defensive closeout situation, then the defense is in recovery. This is an advantageous time to attack because the help is not set. Here is one of the drills we use to develop the ability to attack a closeout or a gap.

Want some zone offensive plays that work and can put your players in an advantage situation? Check out these plays: